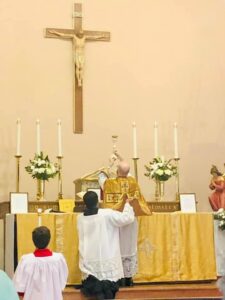 The Traditional Latin Mass (often abbreviated in the colloquial “TLM”) is a term commonly used to refer to Masses offered according to the Missal of 1962, declared “Extraordinary Form” by His Holiness Pope Benedict XVI in Summorum Pontificum in 2007.  For centuries prior to 1970, this was the way the Mass was celebrated all around the world, the same Mass that nourished the souls of saints and sinners for centuries.  The priest faced the altar with the people, offering a sacrifice to God, present in the Blessed Sacrament reserved in the tabernacle.  With the exception of the sermon to the people, the Mass was sung, chanted, or spoken entirely in Latin.

Latin, the official language of Holy Mother Church, is our universal language, and is an international standard in our universal Faith.  We pray the Mass with one voice and tongue, in harmony with all the Masses around the world, throughout time.  In the Traditional Latin Mass, or the Extraordinary Form, we offer to God with our unworthy hands His just due of our adoration, contrition, thanksgiving, and supplication through the unbloody re-presentation of His Son’s one and only sacrifice for us on the Cross.

The difference between Low Mass and Sung Mass

In the Extraordinary Form, there are two primary types of Masses celebrated: the spoken or “Low” Mass, and the “Sung” Mass (sometimes referred to as High Mass).
Low Mass is celebrated by a priest assisted by one or more altar boys. The prayers are spoken (in Latin), and much of the Mass of the Faithful (after the offertory) is almost inaudible, in imitation of the ancient Jewish liturgies given by God to Moses, and emphasizing the fact that we are faced with a profound mystery. During Low Mass, only the altar servers respond to the priest. The priest alone says the Pater Noster prayer (Our Father), and only he assumes the Orans prayer position (hands extended and held shoulder-width apart).
Sung Mass is normally celebrated once a week, at 03:00 P.M. on Sundays. Sung Mass is so called because many of the prayers of the Mass are sung by the priest, choir, or schola. Sung Mass also usually employs the use of incense, prayer position (hands extended and held shoulder-width apart). At Sung Mass, the faithful chant the Kyrie, Gloria, Credo, Sanctus and Agnus Dei with the Schola (choir). The congregation also responds to the Priest in chant during multiple points during the Mass. Solemn Mass (also known as a Solemn High Mass), a type of Sung mass, is the full ceremonial form of the Tridentine Mass, celebrated by a priest with a deacon and a subdeacon, requiring most of the parts of the Mass to be sung, and the use of incense. The parts assigned to the deacon and subdeacon are often done by priests in vestments proper to those roles.
Resources